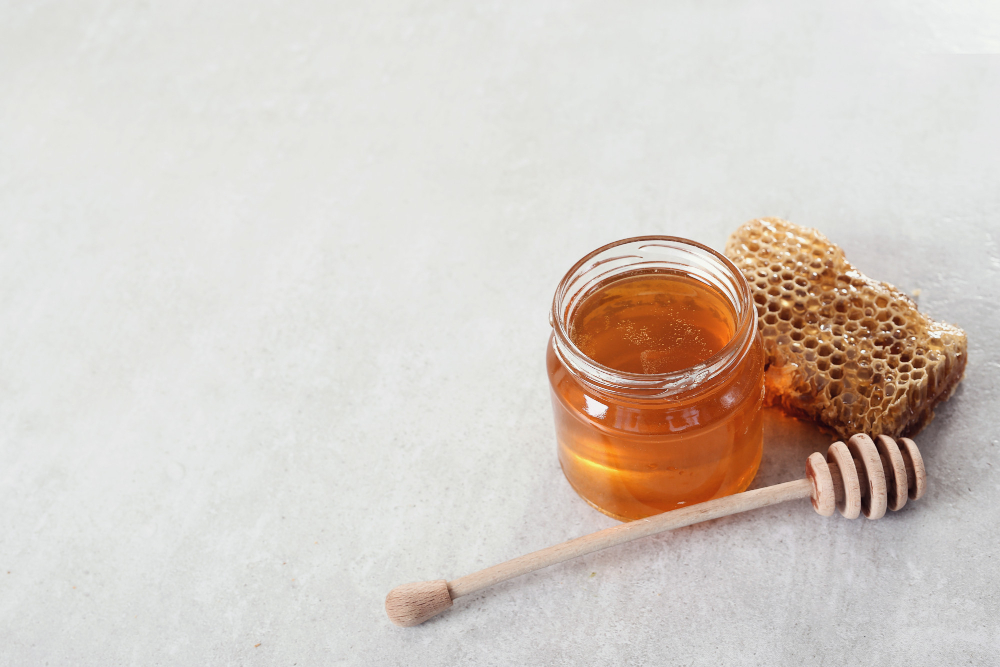 Bees aren’t killed for their honey, so why do some people avoid it?

Honey. That sweet and delicate golden substance that we have come to love and enjoy in so many different ways. From adding it to skin products, to drinking it in tea, having it on toast or as a sweet treat, its uses are seemingly endless. Indeed, the word produced 1.8 million tons of honey in 2016 [1] … that’s about 5 times the weight of the Empire State Building![2]

Honey has been used for many thousands of years; there is evidence from ancient Egypt, Greece and Rome that is was used medicinally [3], and first records of human consumption of it are from 60,000-year-old cave paintings in Spain [1]. And still today it is a common remedy for wounds, sore throats or to improve oral health as well as for inflammatory conditions. Modern science can back this up to some extent, with research into its antimicrobial properties [4,5].

Honey is produced by honeybees across the globe [6]. They take the sweet nectar of flowers and store it in their ‘crop’ – a kind of extra stomach. Here it mixes with enzymes which convert it into a long-lasting food source for the bees… which we call honey. Back in the hive it is passed from bee to bee by regurgitation, and finally it is deposited in honeycomb [7]. It is thought that it takes the lives of an average of 12 bees to create 1 teaspoon of honey [8], and 22 thousand nectar foraging flights to fill a jar [15]. On average per year in the UK, we all consume about 85 teaspoons of honey – roughly a jar [9].

It’s often thought that honey production is a harm free process, but when we consider that on one slice of toast we may consume the life’s work of dozens of bees, it provokes a question of ethics. Indeed, looking deeper into the industrial production of honey, some suppliers have been known to cull whole hives of bees because its cheaper to start from scratch each spring than to keep them alive over the winter. Those that are kept alive over winter are usually deprived of the food source they’ve spent all summer collecting, and instead are given a sugar syrup replacement. This is thought to not provide bees with all the benefits they’d usually get from honey and leads them with weak immune systems and vulnerable to infection [10]. Meanwhile, we enjoy their honey.

Fortunately, not all honey farming is quite like this, local and small-scale beekeeping is becoming more popular. Methods such as balanced beekeeping are often implemented on these small-scale operations, whereby only surplus honey is harvested! [10] Perhaps look out for local honey producers, which support local bees and habitats, rather than big commercial operations.

The amazing thing about honeybees is that they pollinate flowers as a ‘by-product’ of their nectar gathering and honey production, making them a critical part of word ecosystems. In fact, it is thought that honeybees are responsible for 80% of all worldwide pollination according to Greenpeace [11]. But do we really need honeybees to be our pollinators? Some research suggests that wild bees are better pollinators that honeybees. Wild bees include bumblebees, carpenter and digger bees. They are active in earlier spring so are responsible for a lot of the early pollinating. They do not live in hives and hibernate for most of the year. PETA suggests that the only reason farmers don’t use these bees as a form of pollination is because they don’t produce honey and therefore aren’t profitable [14]

Despite our great need for bees, the number of bees is declining year on year, with an estimated 60% reduction since the 1940s [11,12]. Several factors are thought to contribute to this including the use of pesticides on crops, habitat destruction and nutrient deficiencies. It is hard to deny that humans are responsible for these factors. Even nutrient deficiencies in bees could be attributed to human action: with diminishing habitats for bees to forage, and cultivated land being populated with monoculture, perhaps the nutritional content they require can no longer be obtained. To add to this, because we actively take away the bee’s natural food source over winter, perhaps also it’s no surprise that fewer bees survive the winter each year [11].

Shockingly, the UK government has, in 2022, allowed the use of harmful pesticides that are almost entirely banned by EU law. These pesticides are particularly harmful to bees and other pollinators [12].  Below is a link to more details and a Greenpeace petition to reverse this action!

Do we need bees to pollinate all of our other crops? YES, it seems that bees are one of our most important pollinators. But what about honeybees specifically? It seems that honeybees are most commonly used because they can also be made profitable by way of selling their honey! Indeed there are many other pollinators that could be used and should also be promoted in farming practices. For example, all the other types of bees that dont necessarily produce honey!

Is industrial honey production bad? That is a matter of opinion and personal ethics. First of all is the honey industry harming bees? It seems in some instances, yes they are.  Bees have their wings clipped, and large companies have been known to cull their bees over winter. Furthermore, often it seem that too much of their honey is taken from them, leaving them with weakened immunity. Does that mean that all honey production is bad? NO not necessarily. Local and small scale honey production may work more sustainably as to promote bee populations and only taking surplus. Below is a guide to sustainable and ethical honey brands:

What is the main cause off bee population decline? The honey industry does not seem to be the main culprit here. In fact it is more to do with farming practices such as the use of harmful pesticides, and the increasing lack of wild spaces for bees to forage.

This is all a question of where do you personally draw the line? Is harming insects less bad than harming other animals such as fish, birds and mammals – indeed there does not seem to be a climate impact on farming insects. Or do you take issue with the fact we are taking the bees only food source over winter, and replacing it with nutritionally poor sugar syrup.

We would lobe yo know your thoughts!